We are conveniently located on the West side of Laird Drive one block north of Millwood Road and across from Canvarco Road..

Our Laird Street location has an 8 Seat Patio and 20 seats Inside. We provide Free Parking at the front of the building. 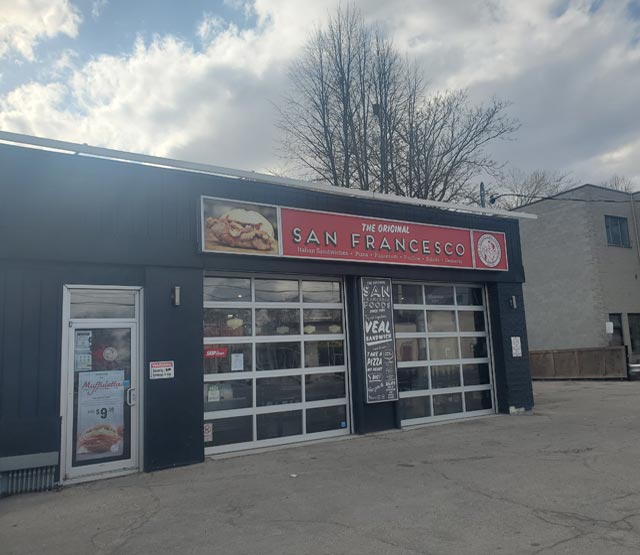 Leaside is a neighbourhood located northeast of Downtown Toronto, the area takes its name from William Lea and the Lea family, who settled there in the early years of the 19th century.The area first developed as farmland along with Toronto through the 19th century. It was incorporated as a town in 1913. In 1967, it amalgamated with the township of East York to form the borough of East York. In 1998, it became part of the city of Toronto.

Leaside station is a former railway station in Toronto that served Leaside and Thorncliffe Park. The Canadian Pacific Railway built the station in 1894 to serve the new community of Leaside, on a railway line leased from the Ontario and Quebec Railway. It sat where village station road runs.

Leaside Aerodrome was an airport in the Town of Leaside, Ontario (now a neighbourhood of Toronto). It opened in 1917 as a Royal Flying Corps airfield during the First World War. During the war, the airstrip became the site of Canada's first delivery of airmail on 24 June 1918.It was located approx at the current intersection of Brentcliffe Rd. and Vanderhoof.Ave.

Thorncliffe Park Raceway was a Toronto-area racetrack that operated from 1917 until 1952. It was located east of Millwood Road, south of Eglinton Avenue East and the CPR's railroad tracks. It was the first home of the Prince of Wales Stakes. The name is retained today by the Thorncliffe Park neighbourhood.

On May 14, 1952, the Sunnybrook Plaza, located on the north-east corner of Bayview Avenue and Eglinton Avenue East, became one of the first shopping centres in Toronto.The site was previously a marsh where people dug loam for their gardens.