Looking for the Best Italian Sandwich, Veal Sandwich, Spicy Fried Chicken Sandwich, Meatball Sandwich or Vegetarian Sandwich in Greektown and the neighborhoods of The Danforth, Riverdale, Broadview North, Coxwell. The Original San Francesco should be your number one choice for Sandwiches, Pizza and Panzerotti.

We are conveniently located on the South side of Danforth Avenue one block west of Donlands Avenue.

Our Danforth Avenue location has a 4 Seats Outside and 8 seats Inside. There is Parking available at the front of the store. 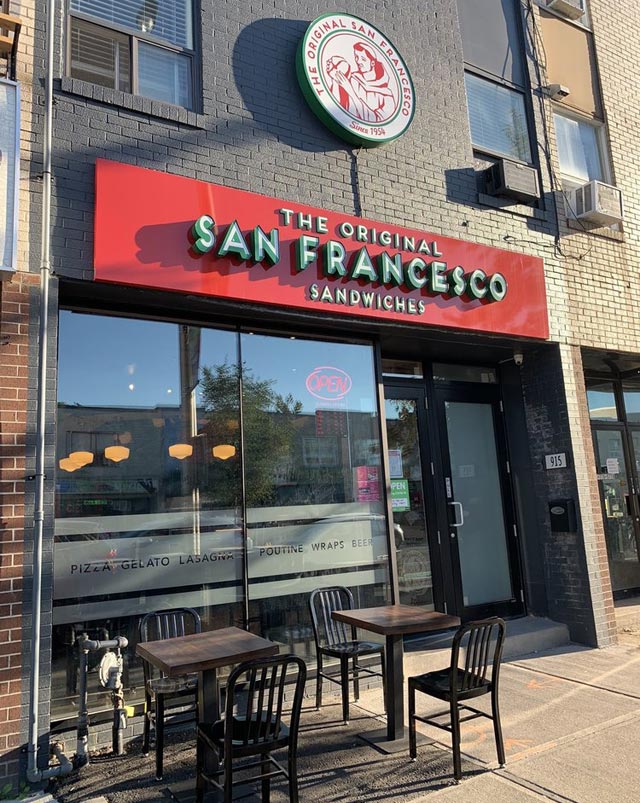 The single most important event in the Danforth's history came in 1919 with the completion of the Bloor Viaduct bridge over the Don Valley, finished connecting the Danforth to the City of Toronto via Bloor Street.

the Danforth saw an influx of Greek immigrants in the 1960s - many of whom were fleeing political and economic unrest.

Did you know that Toronto’s Greektown neighbourhood is home to the largest Greek community in North America?

The street signs in Greektown are in both English and modern Greek.

Greektown on the Danforth boasts one of the highest concentrations of restaurants per kilometre in the world.

Roxy Theatre was the final name of a theatre that operated from 1935 to 2006 on Danforth Avenue.The Roxy is famous for playing cult-classic Rocky Horror Picture Show, every week, from 1976 to 1983.

The first Taste of the Danforth took place in 1994. It's estimated that 5,000 people attended the local restaurant festival. More recent festivals have drawn roughly 1.5 million attendees over the two and half days the festival takes place.

Remember for the Best Italian Sandwich Greektown / The Danforth - its the Original San Francesco!!